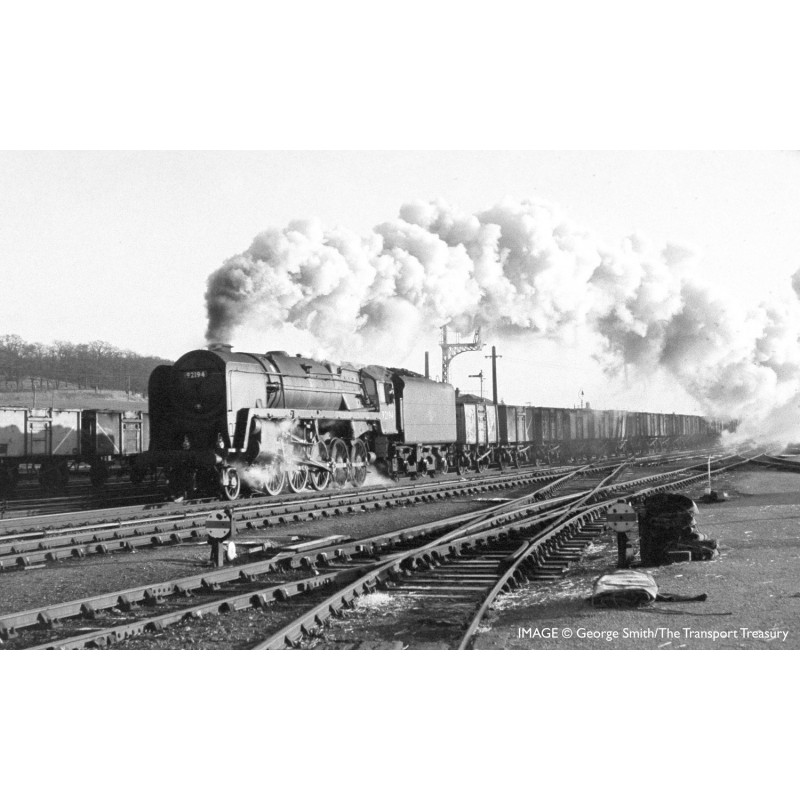 The British Railways Standard 9F Class was a 2-10-0 steam locomotive, the last of the standardised BR designs. The Robert Riddles design was intended as a long distance heavy express freight locomotive. In total 251 of the class were produced between January 1954 and March 1960, with the final locomotive No. 92220 ‘Evening Star’ being the last steam locomotive built by British Railways. The huge length of the 10 coupled driving wheels proved problematic when faced with tight curves, a situation that freight haulage would make inevitable. A solution was found by removing the flanges from the centre driving wheel and reducing the size on the flanges on the second and fourth driving axle’s wheels. Riddles had chosen the 2-10-0 wheel configuration in-order to spread the load of the boiler over a greater area. This meant that the boiler had to be raised considerably compared to other designs to allow the firebox to sit above the trailing driving wheels. As a result, the 9F features a distinctive void between the suspended boiler and the footplate. In operation the class proved extremely versatile. Not only did the 9F excel as a freight locomotive, but when required it also succeeded as a passenger locomotive. Reports even suggest that when 92220 ‘Evening Star’ was used to pull the Red Dragon express service between Cardiff and London it was forced to delay its arrival to allow the restaurant services to be completed, having outperformed the normal Britannia Class locomotives used on the service. This was not the only time 9Fs had been recorded outperforming dedicated express locomotives and on such services the locomotives were capable of running at over 90mph. This combination of high speed, fast acceleration and powerful hauling capabilities mean that many consider the class to be pinnacle of British steam locomotive design. Locomotive No. 92194 was built in Swindon during 1958 for use on the Eastern Region. The locomotive was initially allocated to the Doncaster shed where it spent around 8 months between June 1958 and February 1959 at which point it was reallocated to Immingham. Immingham remained the locomotive’s home throughout the rest of its service before withdrawal at the end of 1965, a life of just 7 and a half years.