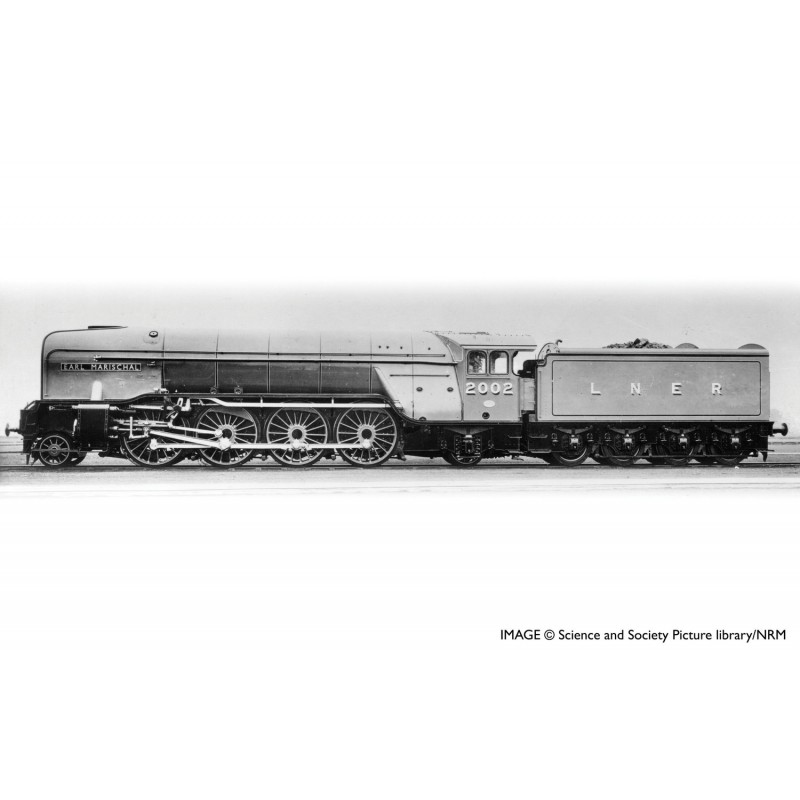 The London and North Eastern Railway (LNER) Edinburgh to Aberdeen route had steep gradients and tight curves and the express passenger service was usually worked by a double header of two small engines. To overcome this situation, Nigel Gresley, Chief Mechanical Engineer (CME) of the LNER began designing a new locomotive at the LNER Doncaster Works in 1932. The 2-8-2 configured locomotive was given the classification P2 and had four driving axles for greater adhesion, an A3 type boiler and a Kylchap type blastpipe/chimney system. A total of six of the Class were built. As the first two were returned to Doncaster for repairs they were fitted with streamlined fronts similar to the A4 Pacifics. The last four to be built were outshopped with streamlined fronts. By 1944 the whole Class had been withdrawn. 2002 ‘Earl Marischal’ was the second P2 to be constructed and differed from its predecessor in a few key ways. No. 2002 was fitted with more conventional Walschaerts/Gresley valve gear which changed the locomotive’s characteristics substantially necessitating the instillation of large smoke deflectors, whilst the original front of the casing had its leading edge cut back 12”. ‘Earl Marischal’ entered traffic in October 1934 and soon began working Doncaster to Kings Cross trains before being transferred to Scotland in June 1935. It was later overhauled and streamlined to match the later members of the P2 class before being withdrawn from traffic and rebuilt as a Pacific locomotive in June 1944 having completed 360,907 miles as a 2-8-2 type locomotive.