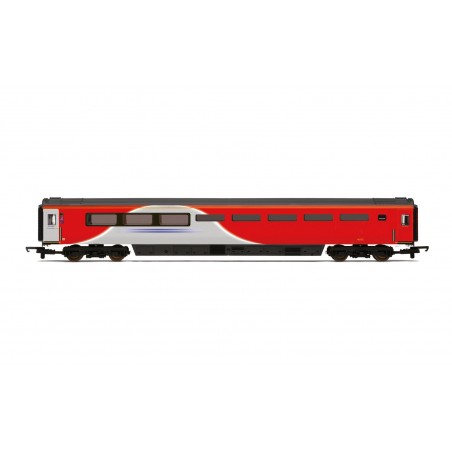 In-order to allow running at 125 mph on Britain’s Victorian era railways, new rolling stock was needed by British Railways. Significant improvements over the Mk2 included new secondary air suspension between the bogies and the coach body as well as aerodynamic skirting on the underframe. Mk3 coaches are 75ft (23m) long enabling far greater capacity than older coaches. Mk3 coaches also incorporate disk breaks and wheel slip protection enabling faster deceleration. The first Mk3 coaches to be delivered were used as part of the HST prototype along with the two Class 41 diesel power cars in 1972. Mk3 coaches entered service in 1975 along with the Class 43 forming the iconic InterCity 125 trainset. In the Mid-2000s the Mk3 stock belonging to the InterCity East Coast franchise, operated by GNER, received refurbishment to bring them up to the same level as the Mk4 coaches that had been refurbished as part of ‘Project Mallard’. LNER inherited its fleet of Mk3 coaches in 2018 after taking over the InterCity East Coast franchise from Virgin Trains East Coast. The introduction of Class 800 and 801 sets has seen LNER replace all its InterCity 125 sets and as a result Mk3 coaches ceased operating with LNER after a farewell tour at the end of December 2019. Nine of the fourteen HST sets transferred to East Midlands Railway.